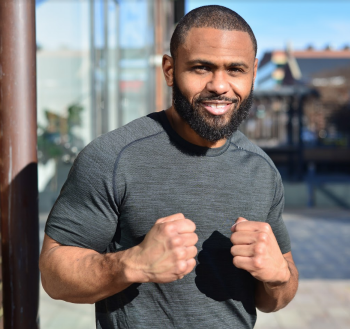 Capitol Riverfront resident Reggie Smith began his martial arts and boxing journey about six years ago when he was looking for a new challenge. "Boxing is one of those things you never quite master so the drive to learn and improve is what initially hooked me, and it's what keeps me coming back," he says. Having spent most of his career as an investment banker on Wall Street, Reggie is now making a second career out of his passion for boxing by opening BOOMBOX Boxing Club at 1221 Van Street, SE in spring 2019.

How would you describe the Capitol Riverfront neighborhood to friends and visitors?

I think the Capitol Riverfront is a hidden treasure that’s just now being discovered.  I am old enough to remember when the area was undeveloped, except for a few night clubs.  Who knew there was a waterfront over here?!?  As great as the Riverfront is today, I think we’ve only just scratched the surface.  I get excited thinking about what the area will look like in five years.

Why did you decide to move to Capitol Riverfront? What were you looking for in a neighborhood?

I was sold the second I saw The Yards Park on the river. It was something truly unique to the neighborhood.  Prior to relocating from New York, I looked at apartments in several other hot DC neighborhoods, all nice in their own right, but The Yards Park and all of the free community activities were the deciding factor for me.

And what about BOOMBOX – Why did you decide to open your first location in the neighborhood?

We wanted to open our first BOOMBOX location in a high-energy and growing neighborhood.  We must have toured fifteen to twenty different properties in different areas of the city, but there was something fresh and new about Capitol Riverfront that matched our concept. It just made sense.  We were fortunate to find a space in a first-class building (1221 Van Street) with a supportive landlord partner (JBG Smith).

What has been the most significant change you’ve seen since moving to the neighborhood?

The amount of development in Capitol Riverfront area is staggering.  It seems new businesses and apartment buildings sprout up weekly.

What is your favorite place in the neighborhood?

That’s tricky…you already know how I feel about The Yards Park on the river, but I really like Nando’s Peri-Peri too.  I’m gonna go with eating Nando’s on The Yards Park lawn.  That’s my final answer.

Use one word to describe the Capitol Riverfront neighborhood.

Tell us what kind of workout we can expect at BOOMBOX.

The workout is best described as “boxing remixed,” where we combine heart-pounding playlists, aqua bag work and functional strength training to torch fat, build muscle, relieve stress, and leave you feeling like a CHAMPION.

When does BOOMBOX officially open, and are there any member specials that you’d like readers to know about?

We are targeting a May 2019 open and will begin offering discounted pre-sale memberships in April.